Difficult feelings about Christmas during coronavirus 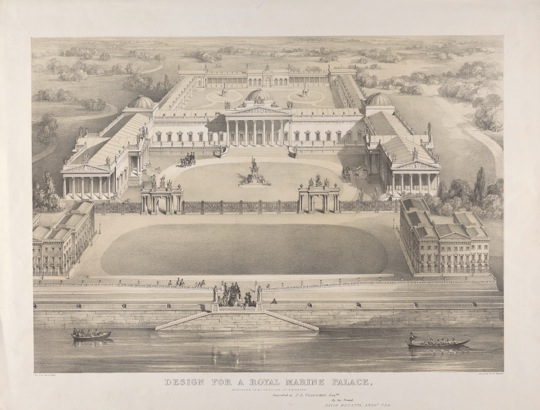 Our collection of historical material related to our area continues to grow. This comprises of general information about the history of the development from 1830, and detailed information related to each house in the form of residents recorded in the annual street directories and the ten-­yearly Census from 1841. We also have an extensive collection of historic photos, and have recently acquired excellent colour images of the original 1830 design for a full crescent, and the 1839 design for a royal palace by the sea by David Mocatta. All records are in digital form.

Sir Isaac Lyon Goldsmid had recently acquired the Wick Farm estate, which included the foreshore west of Brunswick Terrace. He commissioned Decimus Burton to design a development of first class houses, this being the original scheme. Construction began at the east end and Nos 1 to 4 were evidently completed first.

In 1839 Sir Isaac was reported in the newspapers as having made an extraordinary offer to the young Queen Victoria. It was known that she disliked the location and lack of privacy at the Royal Pavilion, which she also considered to exemplify the vulgarity and excesses of her uncle George VI. Sir Isaac offered her the land at Adelaide Crescent and to lend her the cost of construction at 4%. Considering the immense wealth of the Golsmids this was not the most generous of offers to the new monarch and fell on stony ground at Windsor.

The image shows the design of the 1839 palace intended for Queen Victoria. The interesting point about the design is that it includes Nos 1 to 4 already built. The scheme’s relationship to an apparently permanently flat calm sea populated by gondolas is, to the say the least, fanciful.

The Heritage section of the website details more historical information about Palmeira and Adelaide. FOPA members who are interested in the history of their house are invited to contact Richard Hawkes at richard@fopa.co.uk.