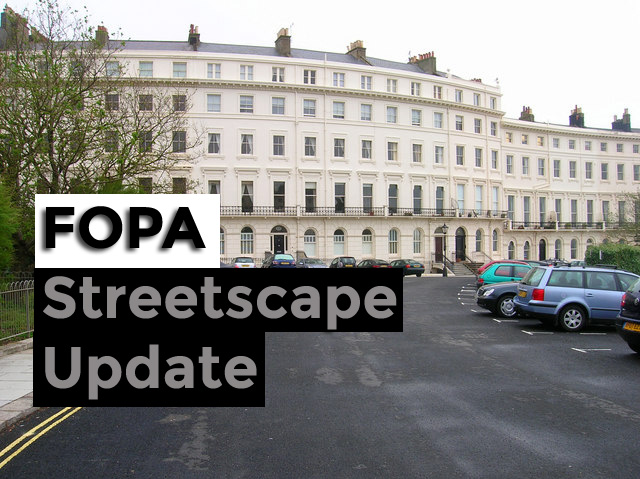 Rory Connelly the FOPA streetscape committee member has been working hard to ensure that our Palmeira & Adelaide streetscape is enhanced and improved. Below is a summary of some of the key areas he has covered over the summer.

2. 2 x lots of graffiti on the Adelaide Ramp walls following Brighton Pride parade (first Saturday in August) reported to BHCC who painted over in magnolia within 24 hours

3. One abandoned bicycle chained to a stand in our area reported and removed by BHCC. Beware if you have a bike in the area that you have left locked up the Council have had a ‘blitz’ on these prior to the introduction of the Bike Share Scheme and any such reported & issued with 21 day yellow notices are being removed much more promptly.

4. Two ‘rough sleepers’ set up a cardboard home on top of the electricity substation in the rose garden of Palmeira Square. This was reported to UK Power Networks who managed to alert them of the potential danger to life.

With temperatures starting to drop for the winter, if you notice someone sleeping outdoors first step is to contact StreetLink.

StreetLink is a national organisation, so you can contact them about homeless people anywhere in the UK. You can find them at streetlink.org.uk, call the 24 hour hotline on 0300 5000914, or even download the StreetLink app on smart phones.

Make a referral using the online form If you’re using the website or the app, there is an online form you can fill in to let StreetLink know where someone is sleeping rough so they can get help.

5. 3 x instances of small tents being set up were recorded in both Palmeira Square & Adelaide Crescent Gardens with only one instance reported to BHCC.

6. A road traffic collision demolishing a bollard and damaging the pavement on the corner of 35 Adelaide Crescent was reported to BHCC Highways on 07 August 2017 and was promptly reinstated and fully repaired within one week.

7. It has been noted that there has been quite a lot of recent casual dumping of black bin bags containing small amounts of refuse (perhaps only a few days’ worth) on the perimeter pavement by parking bays around Adelaide Gardens. We suspect this may be visitors unsure of where to dispose of refuse simply leaving them behind – and it is hoped that the eventual installation of the communal bins will obviate this.

8. The above have all been collected and disposed of on Rory’s weekly Friday voluntary ‘litter pick’ around Adelaide Gardens. Are there any volunteers out there to conduct a similar regular ‘litter pick’ for Palmeira Square??

If you see any issues or would like to help our streetscape team, please email info@fopa.co.uk for more information. This is voluntary with the aim to help keep our streets clean and enjoyable for everyone and we are always looking for helpers.