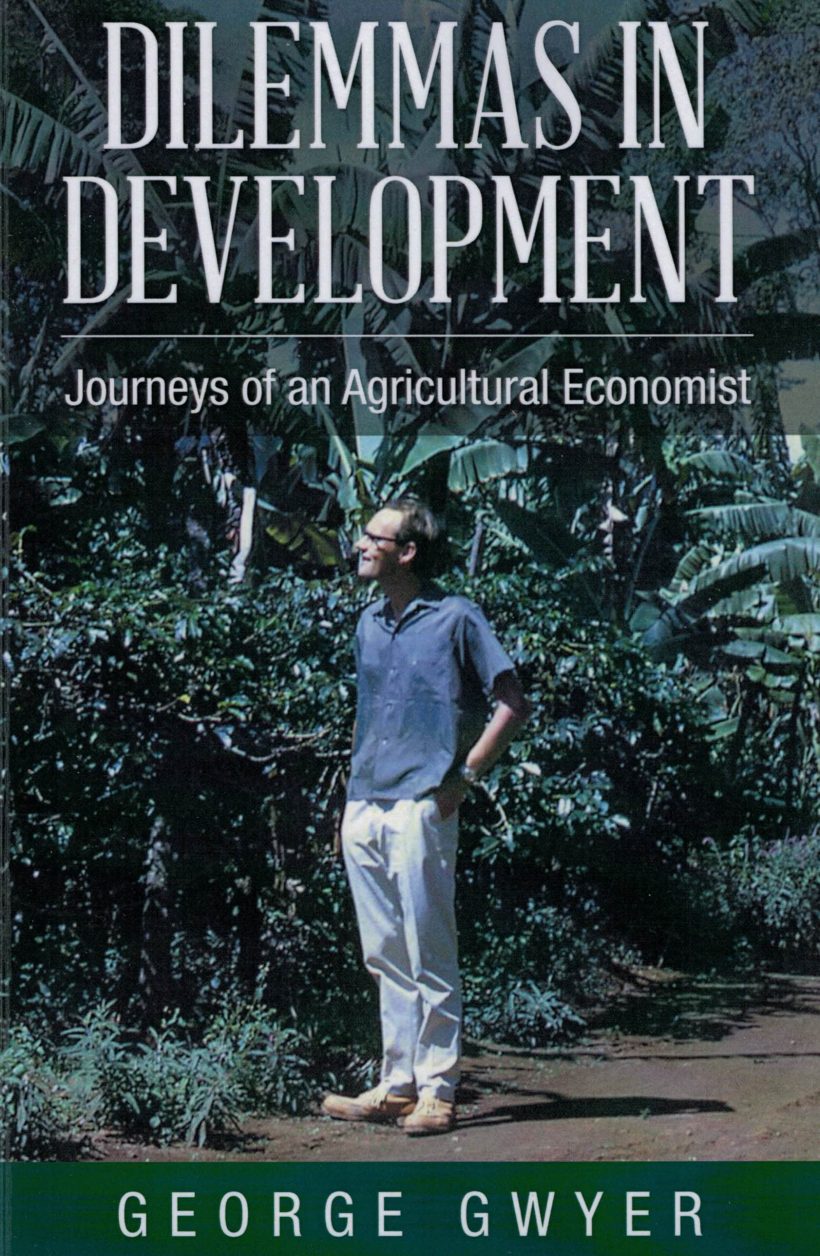 Tim Kirkup and Balint Bodroghy stumbled on a fascinating book by fellow resident and FOPA member George Gwyer –  Dilemmas in Development. It is subtitled Journeys of an Agricultural Economist, and you can’t get much dryer than that in an age of Global Warming and its vigorous Denial. Having first dipped into it here and there I got hooked and ended up riding along on his journey from beginning to end.

It could just as well have been called Dilemmas in Personal Development, a meticulous plot of the arc of his stellar career from school, college, post graduate placements (here and in the States), teaching and then getting enmeshed in the international ebb and flow of foreign aid and political intent, leading to appointments in civil service, consultancy and joining the staff of the European Commission….. and lots and lots of travel (some of it quite dangerous) on five continents, following the filaments of international money, political influence and support for business disguised as foreign aid.

In all his work he weighs the effect of ‘aid’ on the most disadvantaged segments of the population. Engineers might favour heavy tracked machines for moving earth as quicker (and better for a donor supporting their manufacture), but depriving the rural poor prepared to carry sod and hod in baskets on their head for little money but still earning their daily bread.  On a personal note, tales of fish farming in Bangladesh brought back memories of elementary school  in Hungary where our headmaster would take us en masse to help harvest carp in swampy slippery ponds, at day’s end getting home wet, tired, and smelly, fit only for a thorough scrub in a tub.

He became an accomplished diplomat in the process and there is little overt criticism to be found  in the book, be it of individuals, programmes or policy direction – one has to read between the lines to detect his carefully argued misgivings.

Another feature of his career is the huge role played in the story by a coterie of fellow agricultural economists from college days and his working life – a diaphanous web of tough thread maintained with care, much pleasure and reciprocity.

I hope the book gets into the hands of those vociferously debating the role of foreign aid in an increasingly affluent and troubled world – it could provide effective ammunition for both sides: those who argue that foreign aid, particularly if tainted by EU involvement, is a monumental waste of money on costly jollies for international staff and should, instead, be spent on helping ourselves; and those who feel that it is everyone’s duty to help those unable to do it for themselves, even if it wastes some money in the end.

All this – illustrated by some 29 YouTube videos listed under