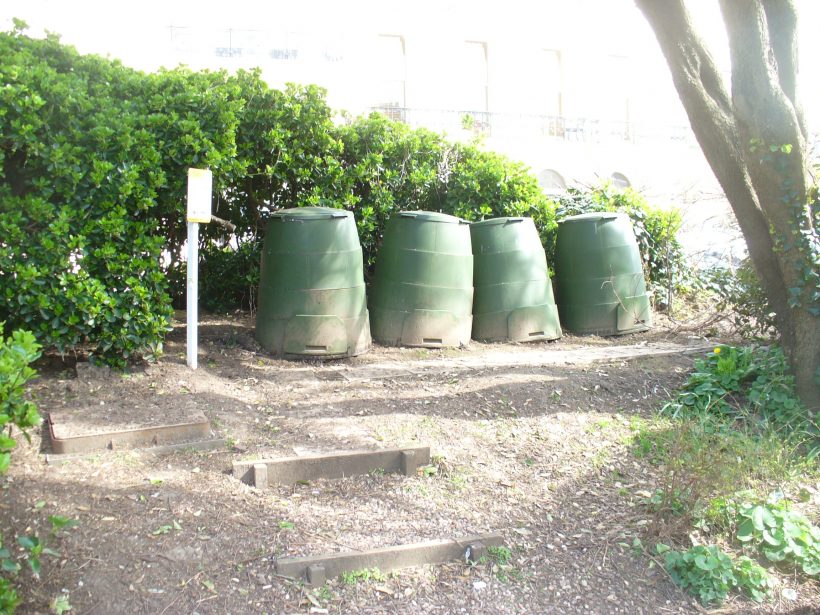 Tubs are filling up and it’s getting warm,
though Summer Time is still way off…..
and too soon to burst into a song.

When you open a compost lid, you’ll scare a swarm of fruit flies into the air, then see them settle back again to get on with living comfortably at public expense (but don’t let Mr Cameron know about it or he’ll try to have them driven off benefits for the sake of all those hard-working people he keeps talking about – that’s most of us, actually, whether or not receiving benefits).

Fruit flies played a key role in the development of behavioural genetics – the study of how genes, and random mutations in them, determine not just the way an organism is built but also how it behaves.

A young American, Seymour Benzer, was working with fruit flies at a Purdhue University lab in the early Sixties, trying to unravel the mysteries of what trait is controlled by specific genes. One day he noticed what you yourself will see when opening the lid of a compost bin – fruit flies, as a rule, are attracted to light. Well, so would you be, had you been locked up in a dank cellar for hours on end with nothing but an indifferent wine to console you and someone suddenly opened the lid to sunlight. Unlike you, Benzer became puzzled by the observation (and, being a good scientist, he was nothing but observant) that the behaviour of individual flies differed significantly – some did not react like the others, some even did the opposite. Why? Would that offer clues to the behaviour of more complex creatures, like us?

Benzer invented an ingenious method for studying this problem: he zapped a bunch of fruit flies with ultraviolet light or nasty mutagenic chemical and segregated their offspring into groups according to their behaviour by inviting them to fly from the dark end of a test tube towards light and observing their appearance (like eye colour and shape) and behaviour (like mating – some quite keen while others, like Clark Gable in Gone with the Wind, just didn’t seem to give a damn). So he mapped hundreds of traits and established which tended to occur with others, suggesting that both may be controlled by variations in a particular gene. So behavioral genetics was born.

The Sixties were heroic years in genetics when the mysteries of inheritance in reproduction unfolded like petals along a fruiting branch of an orchid. It is still going on, most recently demonstrating how new species can emerge (in fruit flies, naturally) even under uniform environmental conditions, just by the occurrence of random variations in the genes that prevent some members of a family from interbreeding while leaving them free to breed among themselves. This observation enriches Darwin’s theories which suggested that speciation results from the isolation of some members of a ‘family’ under different environmental pressures long enough to make interbreeding impossible.

If you’d like to have a go doing genetics on our fruit fly families, I should be happy to show you how to make a Benzer apparatus from transparent plastic straws – you’ll have no end of fun with it.

Hope you all had a lovely Easter.