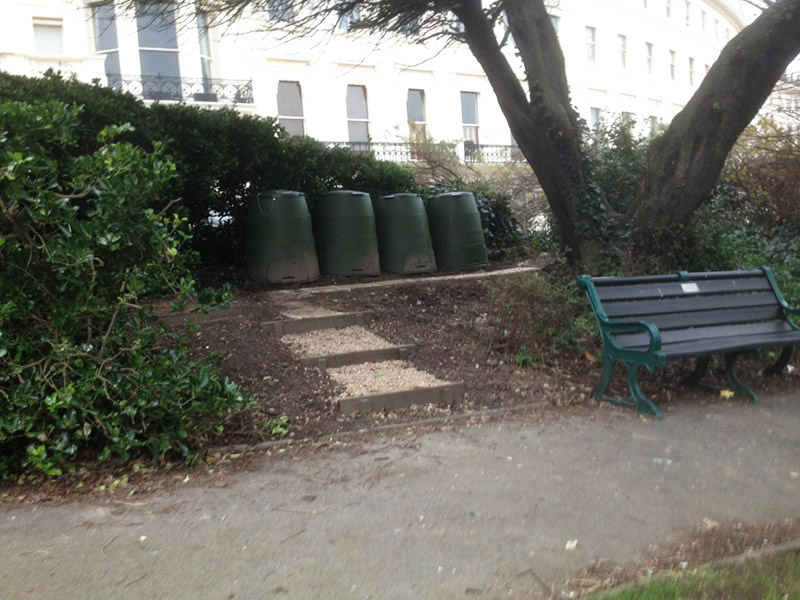 The idea no doubt originated in the naturally idle mind of an untidy prehistoric market gardener who left piles of unwanted cuttings rotting in a corner of his field and then, next year, found that stuff grew better under it than anywhere else – without having to lift a finger…..how delightfully labour saving.

Modern composting, according to some, started only about a century ago when Albert Howard, civil servant knighted for his pains studying the agricultural practices of India, found that manure and cuttings mixed in the ratio of 1 to 3, worked best, with occasional turning. So that takes care of the science.

Fast forward to this century. Our preoccupations have clearly changed in the intervening years. Some of us gag at the idea of growing food with ‘chemicals’ and prefer what we regard as ‘organic’ even if it involves manure, slurry and swill; some of us are concerned by the madness of sending waste for disposal on lengthy journeys around the country and even around the world, and all of us are affected by the tide of pollution from our affluent lifestyle and the inexorable rise in the cost of dealing with it.

And then some of us, flat dwellers, have a romantic notion that this nonsense can be short-circuited by returning our vegetable wastes direct to the lovely gardens right in front of us via a few little boxes and a bit of loving care and attention. So, with Adam Batchelor, B&H Council and Roberta Emmott of the Brighton & Hove Food Partnership, we found suitable places in Palmeira & Adelaide and got some  fine boxes made of recycled timbers and embarked on a happy little community adventure of home composting.

We hoped to make friends with our boxes and perhaps give them cozy names like Elsie, Bessie and Boxer (hard working shire horse from Orwell’s Animal Farm). But composting, deep down, is quite a complicated business with all sorts of organisms competing to get in on a free meal…..with results that are not always to our liking.

Composting comes in two flavours: aerobic, that is to say air breathing, or anaerobic where access to air is severely restricted. We use aerobics in Palmeira, so the material must be kept ‘light’ and just moist so that air can reach every corner. Soggy or impermeable pockets will turn anaerobic – a different process altogether that can become messy and smelly. To avoid it, we add plenty of cardboard to ‘lighten’ the stuff and soak up liquids – ideally 50:50, so half the stuff in the boxes is in fact ‘paper’. That way we encourage development of the ideal aerobic micro-community to keep our boxes composting sweetly. That, at least, is the theory.

Microfungi are the ideal guests at our feast – they spread silver filaments from end to end to digest all manner of organics including even the cellulose in plants, cardboard and paper that defeats most other organisms muscling in on the game.

Less welcome but inevitable when composting are flies. Fruit flies, barely visible little helicopters, feed on the stuff and lay eggs in it so their grubs will munch and burrow their way digesting and keeping it all ‘airy’. We hardly notice them.

Aerobic composters are also seeded with rain worms. They work happily in tandem with fruit fly grubs and we become aware of them only when ‘turning’ the compost to make sure every corner is aerated.

Occasionally other insects will colonise the boxes, as happened to us this spring. This lot are small black flies that swarm into the air when disturbed and put off the unwary. They mean no harm as far as I know but are a nuisance. We are doing our best to be rid of them – other boxes in Brighton & Hove do not seem to be affected. In the meantime we have received a third box to start a fresh batch of compost free of black flies while the others mature in peace – and, we hope, without disturbing anyone.

Well, this may be enough for a taster this time – more to come, in the fashion of rolling news without which we seem hardly able to cope these days. So don’t give up hope and keep the home composts working.