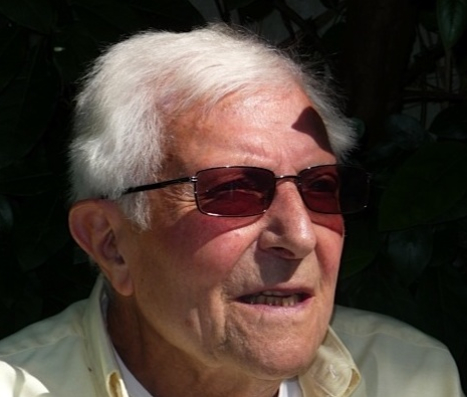 We say a sad farewell to one of the Square’s best known and longest residents. Randall Hart, his partner of 53 years and one of FOPA’s founders writes: Reg was born in West Ham; his mother Grace had forgotten it was New Year and thought the bells were ringing for her new arrival. When he came back from Palestine he found the new suburb of Welling, where the family had moved to, too dull and moved to Brighton. We moved into Palmeira Square in the 1960’s when we could park our open MG TF outside our house and felt quite annoyed if someone dared to park in our spot. Reg was a partner in a firm of Architectural Model-makers, having built a model of the Festival of Britain in 1951 and gone on to model such schemes as Piccadilly Circus, Paternoster/St Paul’s Cathedral, Gatwick Airport, London Bridge and many in Africa, Australia and New Zealand. Things changed when computer modelling came in but he moved on to engineering work building models of dry docks for Dubai and teleprinters for ITT Creed. Later he kept his interest in architectural work by managing the local branch of J.D.Beardmore, suppliers of architectural ironmongery, taking early retirement when once again chased out by the computer age. He was often seen sitting with his laptop in the window of No.10, but he was only playing Solitaire. He took a keen interest in the work of FOPA and enjoyed the coffee mornings. We eventually managed to fulfill our dream of owning a property in Ibiza, a place we had visited for many years and both loved. We spent almost two years there, on and off, and were really happy. Although Reg was not very mobile, he loved our walks along the ‘Prom’ and our trips out in the car to enjoy a glass of Vino Tinto and Tapas. He passed away in the hospital at C’an Misses in Ibiza Town, wher the care was excellent. He is now at rest in the hills above Santa Eulalia in a tranquil spot amongst the pine trees. He is so greatly missed.